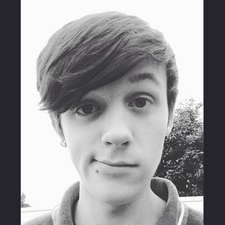 Basically, I dropped my phone, screen-first, onto a hard floor. It cracked really badly. I thought to myself, "I successfully repaired an iPhone 4S screen many a time, and as that involved taking the phone to pieces, how hard can a 5S be when you remove the screen from the front, right?"

I watched the iCracked YouTube tutorial (I didn't buy my screen from them, I got it from Htechy). I realised you had to replace the button (which the hole didn't line up with on the screen, despite the screen being a more expensive one) and the camera and speaker and all that jazz. I did it all, put it back together and it seemed to work fine. Home button was a bit sketchy with the placement of, but it worked completely fine. The ear-speaker and front-facing camera worked too. I thought "Brilliant!". But after a few minutes, the screen would not respond to my touch or would type by itself (i.e. spam a key. usually on the left side such as E and D), but only for a second. After a few hours, the same problem kept happening worse and worse, but I would just lock my screen and unlock it and it would work pretty fine. But now, 2 days later, I can barely use it because:

I don't know what's wrong with it and I don't know how to fix it. I can try fixing it if I know the issue. I doubt any phone shop would touch it now I've done it, either.

Hi Louis! I have the same issue as you, and it even emerged after I had my screen fixed. Did you find a definitive solution? If so, could you please share on the thread? Thank you!

have you tried to do a hard reset on the iPhone? (Hold down power and home button but don't swipe to power off and let go once the apple logo appears again)

Hate to be a nuisance, but how would a backup and restore fix it haha

Tbh it's the only option I can think of unless you take apart the phone and put the components back together. If that doesn't work then might be the display that is faulty.

Hi Louis, I have fixed many iPhone screens and have come across a few iPhones that have had the touch issue your having. I would try the hard reset first that Sam mentioned. If that doesn't work then I would open the phone back up and check all the display assembly connections and make sure there all snug. Sometimes the problem is as simple as a lose connection that is not fully snapped on tight.

This guide should help you out. Sostituzione schermo iPhone 5s