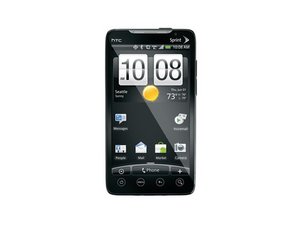 The HTC EVO is a Smartphone by HTC powered by a 1-GHz Snapdragon processor and runs the Android operating system.

Where are the GPS unit and its connections?

A couple of weeks ago, I stupidly opened my Evo 4G, attempting to remove some water from the screen. I destroyed the display in the process. That was easy enough to fix. However, I later discovered that the rear speaker wasn't working. Apparently, in removing the inner frame from the display assembly, I had damaged some contacts. The first I discovered was the top spring contact on the right-hand side. In trying to get it back on, I lost it, but didn't notice any change in the phone's operation. I then noticed that one of the little "bowl-in-a-box"-shaped parts along the right-hand side of the sticker had been pried up on one side, and that a wire beneath it had been ripped off its contact. I did my best to solder all three back in place, and the speaker now works.

However, I then discovered the GPS doesn't work. I eventually found and resoldered the missing spring clip, and applied to iron to the bottom "bowl-in-a-box" part on the right-hand side, which seemed to be possibly loose. Neither of these things affected the GPS (or, as far as I can tell, anything else).

Does anyone know how I could have broken the GPS and what I might do to fix it? One hint I have is that the two parts I broke were underneath holes in the inner frame (the teardown video is unclear, and at first I couldn't figure out where to stick my tool).

+ vote for your success!!

If I understand correctly, those "bowl in a box" components you speak of are probably the connectors that the factory uses to flash/test the antennas or internal circuitry of the communication system before the board gets installed in the chassis. If you slightly broke one of those off the board (probably the one for GPS), it may have broken a trace in one of the many layers that comprise the logic board. IMO, if everything is connected correctly and the GPS doesn't work, it's probably never going to work again. We have twelve guides for this device, so stop using teardown videos!

The GPS chip itself is highlighted in dark blue in this picture.

Actually, it was your teardown guide I was using. The guide (as opposed to your accompanying video) neglected to mention the necessity of warming up the adhesive before removing the glass, which is how the display got destroyed. It was also a tad confusing on where to stick the tool when removing the inner frame.

At any rate, that's old news. Would I be correct in taking your implication that the test connector for the GPS should be near other GPS circuitry? And do you have any idea what the two spring contacts on the upper right corner connect to?

I have no idea which of the test connectors corresponds to what chip. They look pretty scattered on the board so it's hard to tell. It looks to me like the two contacts near the top of the board contact one of the antennas on the rear inner frame. I'd put money on that being the GPS antenna, as you said one/both of the spring loaded contacts is gone. If one of the contacts is gone and the other is intact, and there is enough surface area left to solder to I'd just make a new contact (clone the old one) out of thin copper sheeting and solder it in place of the old contact.

I found the missing contact and soldered it back into place. That weird didn't seem to affect anything at all, though perhaps the connection is bad. Anyway, thanks.

A little more info that might be useful: the test post in question (the uppermost one) does appear to be that for the rear speaker. If it's loose (still connected on two contacts but not the other two), the speaker won't work. However, if it's removed entirely, the speaker works fine. There's a contact beneath it that connects to the upper antenna clip; this would seem to be for the GPS, which explains why problems in two different places (a broken connection and a missing antenna clip) would only affect one function of the device. I couldn't manage to get this connection working again, though.

I can confirm the top right copper clip like piece is for the gps. It fell off when I took apart my phone to replace my cracked digitizer. I thought nothing of it and kept the copper piece in safe area . Weeks went by and I was wondering why my gps wasn't working. Then I decided to try to glue the piece back on and now my gps is working again. Took about 5 min to fix.

I'll pass that last bit along to the person who bought the phone from me. I did replace that clip (the "spring clip" in the original post), though--the problem was that I borked a circuit leading to it on the mainboard.

Broken/Lost EVO Contact Clips. Well, actually 4 of them. Thinking of something to improvise for the clips... I thought of springs in a ballpoint pen. I trimmed them down, soldered them into place of the missing clips and walaaa... WiFi and GPS is back!