First of all, I am not new to repairing Apple devices, or even the iPad mini in this case. I own a repair shop in the Netherlands. A customer brought in 2 iPad mini's both wifi only versions with cracked glass. I replaced both digitizers with good quality aftermarket one's. One iPad is working fine, without problems. However the other one randomly shuts down. I already opened it again and disconnected the battery for a couple of minutes and reconnected it. After that I left it powered on during the night and there was no problem. It will still on and didn't shutdown during the night. This morning i started to use the iPad again and all the suddenly it reboots again, most of the times it bootes just fine, after very little usage it reboots.

Does any of you have the same experience, and more importantly, is there a fix?

Thanks for reading! I am looking forward to the reply's.

I would guess this is damage inside some chip from the original drop if this problem continues after restore.

Wait---I bet I know what this one is.

It is the common pry damage at the battery connector---check for something like this pic. If you've accidentally flicked off components with fingernails/tools by prying up the battery connector on the board side instead of the battery side, then the iPad has lost its 'gas gauge' function of the battery. i.e. it reports the wrong battery charge percent, and it doesn't 'know' when the battery is dead---it will continue to try and boot off a dead battery instead of engage the low battery logic. It looks like the problem you describe. putting it on the charger overnight will alleviate the problem, because the battery can actually charge....but once the battery runs down (even though it says it is still charged) the apparent boot loop problem begins again.

If your customer is in the habit of putting the ipad on the charger regularly, she won't see the boot loop problem because it won't get too low.

Replace the missing components at the battery area and it will solve.

I am posting a picture of this damage---let me know if yours looks like this. 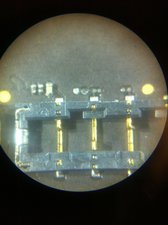 Thanks for your very detailed explanation. I will definitely check the connector for any damage. However, when the problem occurred the first time, i had not removed the battery connector yet. So i don't think in this case it could be the problem. But you never know. I will let you know.

Thanks for this Jessa, I just fixed mine using spare parts from a 2nd Mini I had. Glad there are more than 1 of this 240ohm 0.2a-0.8a resistor/filter elsewhere on the board because the first one flew away when I was trying to hold it with tweezers ! lol !

my iPa mini started doing this yesterday, NO REPAIRS HAVE BEEN DONE TO THIS iPAD! It has NEVER been opened before, can this 'gas gauge' issue be caused by this software called Reiboot? I accidentally put my iPad into recovery mode and couldn't get it out so I used reiboot to get it out, then I did a "semi-Jailbreak" so I'm not sure if its the battery bus, or a bad NAND or CPU. Please help jessa! :)

edit: forgot to mention my iPad mini shuts off even on the charger and sometimes brings up the spinning pinwheel as if if is shutting down - just like as if the battery has died.

Reiboot can't damage gas gauge. But a battery can get old and gas gauge function can go bad in an old battery. If you have a device that is randomly restarting after jailbreak, then rule out software first.

Have you made sure the front panel assembly near the home button has no exposed connections. You can see an example of this here https://www.youtube.com/watch?v=1_hGBxOP... Sometimes those connections can short and cause all sorts of issues.

Thanks for your comment, on this particular iPad I left the connections open. Taping them off would make the digitizer go crazy. The customer reported that after doing a iTunes restore the problem didn't occur again. She wen't on holiday's so I'll hear how it goes when she gets back. If the problems comes back I will try to tape the exposed connections.

I know this is coming late, but I've dropped my ipad 2 twice, and the first time had it repaired in the City - before getting it fixed locally, the second time. This second time - having handed the ipad over to my son upon repair, he reported the same problem above. The replacement screen seems pretty 'loose' also, apparently due to a crack in one corner of the iPad. To 'fix' the problem, I went into the 'settings' panel and turned off the switch where the system was instructing itself to turn off the screen, each time the ipad cover was flipped on (even though I haven't bought a cover for the iPad yet. From what I could tell, each time the screen was pressed and released, or turned upside down or rotated - the system appeared to think the cover was being shut. Turn off all the 'sleep' and 'cover' options, and see if this works in future.

I got the iPad back, the rebooting problem still occurs. I opened the iPad up, checked the battery connector, however there is no damage. Also, I covered the connectors with tape, but no luck either, the iPad still reboots. So I changed the digitizer, i placed it in place but didn't remove the 3M yet. I tested the ipad for several hours and it did not reboot. After removing the tape and placing the digitizer in place again the iPad suddenly rebooted almost straight away. Am I missing out on something? Anyone with an idea?

You've done great troubleshooting and done an even better job of describing the symptoms. Here is my train of thought on it:

It works with the display not secured. Normally that is a sign of a bad digi. We all know how common bad digis are for Minis. Do you have a known good one to try? I know you tried a different one but do you have one you know that works that you can try? Start simple and work up.

If you are positive the digi (and IC) are good, then its time to move on. The device works fine without the screen secured and the power is what is affected, so I'm going to be looking all over the bottom of the mainboard for something that isn't right. Did you knick the battery flex? Anything on the bottom of that board loose at all? Is one of those stupid, tiny iPad mini shield screws stuck where its not supposed to be?

Your problem has to be somewhere in that bottom inch. Otherwise it would be worth the giggles to slap a new battery on and see if you still have the same issue.

Does the iPad turn on by pressing de Sleep/Wake Button?

If it does not, the problem is as jessabethany described

Yes, all the functions work as normal.

Have you seen the chips near the battery connector?

I have the same issue I've installed a second apple refurbished digitizer, I have no battery terminal damage and the LCD is a used apple replacement as well. I am going to do a restore again and post my finding but so far I have no clue either I've done several and never had this problem and when the original smashed screen was on it never did this

how exactly do you know these parts are apple replacements if you installed them yourself?

Sven, have you solved this issue? I have the same EXACT problem

No, I haven't found a solution yet. I gave the iPad back to the client. It probably was caused by the drop.

Has anyone else found a resolve to this short of telling the customer that it's drop damage. Customer says that cracked digitizer installed and being used under a screen protector, that none of these issues existed. My situation is that it will lose wifi connection randomly and also reboot randomly. The unit and wifi do work perfectly, but both situations happen from dropping signal and picking it back up no issue randomly, and the powering down issue. Haven't confirmed if it's timed close together or just genuine random (minutes this time, hours later time). I did disconnect the battery per instructions for the digitizer swap, but with that said, never played with the unit for hours once I saw the digitizer working as it should. Any help would be greatly appreciated. Hard reset was done (holding both buttons), but haven't done a full restore of the operating system (using itunes). Telling customer to try to do a full recharge first but any assistance would be greatly appreciated!!!!!

On an iPad mini 3 I was in same situation after a digitizer replacement. Before the disassembly everything was well working. I installed a mmobiel replacemet part and it reboots continuosly on the screen reactivation.