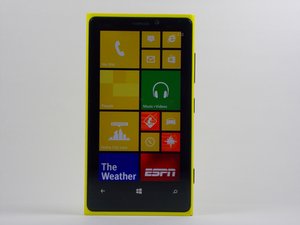 We've got a Nokia 920 in, great phone but we know the software and ROM is quite flakey and leads to all kinds of issues.

We can solve most SW issues but this one is odd;

We changed the screen and all was working OK. The owner went to do a software update under the advice of her carrier (wasn't told to leave it plugged in, but we're not sure if it died mid flash). It got to the gear screen and stayed there all night. it had been plugged it in by this point.

Still like that this morning, we performed a soft reset, and now it's stuck on the charging screen. 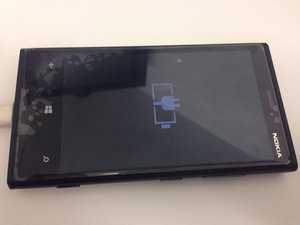 Trying hard reset and soft reset does not help this, we get the Nokia logo then this charging screen.

When this is on, if we disconnect the power cable, the phone immediately turns off.

So, we know the battery and charging circuits are ok, but it seems to be stuck here.

any idea how to kick it out of this loop?

I had a similar issue and found the issue was due to a loose battery connectors. Yes just that. First I tried all the trick (holding buttons, etc.) But nothing worked.

On last effort I took a scalpel (Yes, I am working in a medical office :-) ) and carefuly pinched the connector of the battery. Inserted it in the phone and immediately the process of resetting the phone that was initiated while I was trying hard with the phone on the begining started and the reset completed successfuly.

I created an account just to say that you are the greatest. It worked realy well, after trying almost everything.

Ok, we managed to get this one resolved ourselves, after a day of research and configuration.

What looks like has happened is what we all probably expected. it's failed during a software update.

The reason we we're getting the battery low symbol was because the battery was low. Due to the software issue, it was very unlikely the phone was being instructed to take charge properly. so it was sat in power limbo.

We managed to get to recovery mode by. volume down + power. then as soon as the image disappears on screen hold volume up, all the way through the buzz and to the Nokia Logo.

Thn you get an image of a cog and lightning bolt. Recovery Mode/Flash mode, whatever you want to call it. Now the hard part, getting a flash tool and a ROM.

After searching numerous sources online we found that we need two tools.

The problem here is that NaviFirm has been blocked so that when it starts up you don't get the list of phones to select ROMs from.

Unless you follow this tutorial we found. Navifirm 2013 100% WORKING!!

We used the link in that videos description to get NaviFirm, but read the comments if you cant get it working. After you extract the files check the size of the "cache" folder. Now run NaviFirm and wait, you'l get an error. then check the cache folder again. It's now empty!

then run the original NaviFirm again and hurrah, it works.

In regard to which ROM you need, it depends on your handset/location and carrier ect. For the Lumia the ROMs we're rm-820 and rm-821. then look throgh the lists to get one with a name that looks relevant to your device.

To Flash the software we watched this tutorial as it's relatively straightforward.

So there you go, even if your 920 is bricked, so long as you can get to the Flash mode screen, you can probably fix it.

Alternatively, it looks like Nokia are aware of this issue and we've found numerous reports of people with this issue having their handset swapped no questions.

We will be posting a more detailed guide to this repair on our website at www.digitalplumbinguk.com If the community here do think this is useful then we'll post it here too but so far this thread hasn't had much activity.

My phone crashed watching YouTube and would not wake up. Several soft resets did nothing and it was stuck in that charging loop. I did the soft-reset then held volume up to get into the recovery mode. Once there I did another soft reset, nothing happened, it sat charging for another minute or two and then spontaneously booted normally! Thanks for the recovery mode tip, maybe that allowed it to actually charge again.

Hey I'm stuck on the clog/lightening bolt bit and don't know what to do next IVE watched the YouTube video and have simply no idea how to do anything!!?? I've been sat here watching it for about ten mins and it's done nothing, when u take the charger out it is staying on the clog and lightening bolt sign

I left mine plugged in for a couple of days. Eventually it got enough power together to sort out the issue itself. Came back online a few days later all on it's own.

I have had a similar problem with my nokia, 820, I am not exactly sure what I had done,

ie pluged into my laptop, charging, or state of charge, but the phone screen came up with a

"lightning bolt arrow, and a cog wheel" (best description I can give)

No button response, so I removed the back, and battery, waited for about 5 minuets, re assembled, all ok, and has been ok for a week now.

Hope this helps someone.

First do the thing Digital plumbing said above

The Phone restarts and problem gone

Tried it with my lumia and it worked

It not worked on my phone(soft reset and hard reset, no vibrate)

I cant try to my lumia, soft reset and hard reset cant worked on myphone (sorry of my english)

Please help me out

guys i tried the Option above but it did not work but then i followed this link.

Worked fine. this link is much easier to follow

Volume down and start button! worked like a charm!

My lumia 620's battery went critically low and turned off. I plugged it in charging but even after 3hours it didnt turned on, with only the charging logo flashing. As soon as i remove it from charging it turns off..

Itz just been a year since i bought the phone and the shop where i gave the phone for repair says battery is not of any uze. He tried a new battery bt the phone is still not switching on. Please help, i think there's no problm wd d battery.

Please help , how to turn it on.

Same here with same problem guy. But mine wont go ahead of Nokia boot logo screen, now, if im typing this, only 2 times i have got Start screen , then i see nothing wont respond, buttons, screen itself, but live tiles are working cause small pics are moving , ex. in People Hub. 5-10 secs later phone just turned off. and guess... started all over again! Trying to start phone, but weird is also that it vibrates but after 5 or even 10 secs after i pressed power button . Normally it was after 2-3 secs. Nokia logo also appears after 10-15secs normally i remembered - around 5 secs. i dont know what to do. Tried also Windows device recovery tool but with no markable success. First , it want not discover my phone even, and second, even when Nokia logo dissapperars for some seconds so program thinks phone went done from Nokia logo and should see now windows logo, but windows logo in my phone just doesnt appear, cause it is stuck at boot Logo i think. Then some tries of recover software still failed . Can u help

This trick has been said working for some of my friends and me too!

"put device to test mode"? what the heck does that mean? not helpful!

After i reset my phone and when it turns on it go pass the nokia logo then get stuck on the T-Mobile logo.it been stuck like that for 2 days straight.

please give a solution

on phone then nokia in screen and rotate setting sign and down installation bar so please help me.

I experienced similar problem with my Nokia Lumia many times. This might be happening due to loose battery or some other issues with battery like low charge.

Just you need to do some basic steps.

May have to repeat this a couple of times.

Thanks for your patience.

Battery isn't having a good pin connection, try using a paper to make a tighter fit.

Hi.I had the same problem.I removed the charger,then removed the battery and did hard reset.

For hard reset you should hold the Power button till it vibrates.When its starting to vibrate hold the vol. down button and release this when you see an exclamation mark.Now press vol. up button then vol.down then power then vol.down(in the same order).Now your phone will hard reset (removes all files except sd card files).You can quickly see two gears making updates and then the phone works....(hope).just try it out.

Maybe it will work for you too.

I don’t know what actually happened. Last night my win 10 phone was completely dead, only showed that charging screen. Then:

# I plugged it out, and kept unplugged for the whole night.