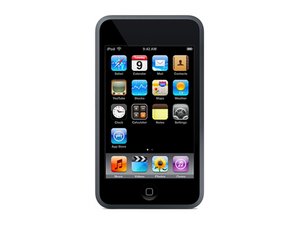 My iPod touch 1st gen 16Gb backlight on the LED does not function. I,ve changed the LED Dispay but it still does not work.

I,m suspecting a hardware problem, but where can i couple up the backlight circuitry to the logic board to fire up these lights? The iPod functions as normal apart from it's difficult to see the screen unless in direct sunlight.

Can anyone give a solution to this common fault?

there are many things that can cause this problem

it could be a software issue - maybe you should try this first:

1. From the Home screen, tap Settings

hardware issue is also possible, anything happened like a fluid damage or did you dropped it ?

I have the same issue. Some hardware suggestions would be nice. I do not want to have to toss this device in the land fill :)

Oh and regarding doing the reset since the screen is super dim it would help to have a working iPod next to you so you could run through the steps on the good one to help you know what to select on the broken one.

I know this is an old post but I would like to ask a few questions. My backlight is not working on my Ipod Touch 2g. I replaced the LCD being the cheapest route about $15. It did not take care of it.

I contacted a couple of places that fix them and one person said its most likely the Main Board (Logic). He said either the coil and or fuse on the board.

Another repair shop said most likely the board to and they do a Re-Flow that supposedly in 90% of the cases fixes that issue.

All I want to do is listen to music I don't care about all the features on the ipod touch but could I do an LED(s) mod to the inside to give me some kind of minimal backlight? I see people doing mod's to the Apple Logo on the back of their iphone's

I know there is not a lot of room inside but I think enough to put 1 or 2 small LEDs in there?

What is your opinion on the feasibility of such a mod?

this is an interesting question best answered in metaifixit I think, so I'll try to get it moved and then hopefully you'll get a good answer. If not then try "make" which is affiliated with this site but is for modding etc.. good luck,

Yes, you should be able to do something like that. You'd need to find a power source on the board, measure the voltage, and then pick LEDs that would work. You'll need to carefully remove the backlight from the LCD so the LEDs can shine through.

Kyle Wiens you know which is the voltage that powers the ipod touch 2g leds?, In order to seek a good input voltage to make jumpers.

If you need to get the backlight going on your ipod. Here is a link to a video showing you how. https://www.youtube.com/watch?v=t_sT1nkT...

Jonathan James, please be careful that you do not refer to your own company for repairs. That would make your answers SPAM.....