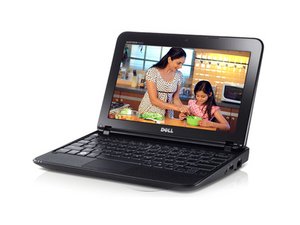 Also known as the Inspiron Mini 10, a lightweight netbook by Dell.

I know it's a long shot but was hoping someone might have some idea what's wrong. I have a Dell Inspiron 1018 NetBook. It's really my daughters, we use it on road trips and vacations with a buch of movies transferred to it.

I had upgraded to a large HD and 2GB of RAM. It had worked great for a long time but recently started having trouble with the power jack in the back. It seemed to come loose and then just would not start one day. The battery was dead and would not boot even without it.

I ordered an OEM replacement for the jack with the wiring attracted. It came in the other day and popped it in. Problem in now is when I plug it in the power light comes on but will not boot.

I have tried to boot it without the battery and leaving it plugged in for a while. But something else must be wrong because usually when plugged in and off the power light would flash but now stays on all the time when plugged in.

I am just wondering if anyone has any idea if there is more wrong with it or if there is something else I can check. I'd like to get it going again, but really don't want to put and money into it.