By now you know the consumer cycle: another year, another phone, right? But Fairphone isn’t one to follow the crowd. Their newest offering, the Fairphone 3+, is an upgraded version of the 3—one of only two phones to earn a 10/10 repairability score (Fairphone made the other one, too). So how do you “plus” a perfect score?

Thinking outside the box

Digital detox is trending, and the number of consumers who want to avoid waste and consume more consciously, or upgrade less often, is increasing. Trends like these are positive for the people, and for the planet. And the more repairable a device is, the longer it thus lasts, the better. We probably don’t have to tell you, as you’re currently surfing the biggest online community for keeping things instead of replacing them.

Still, consumer electronics have a long way to go in that regard, though some manufacturers prove that a device can be both modern and repairable (or upgradeable). The HP EliteBook line, and the latest Mac Pro, are some of our favorite examples.

Portable gadgets though are often the worst of the bunch. There are only two phones to have earned a repairability score of 10/10: the Fairphone 3 and its predecessor. Both encourage their owners to repair them when they break. Both are foundational pieces of Fairphone’s vision for a circular economy. We need this kind of bold thinking, and we’re happy to see these phones still going strong.

The Fairphone 3+ is a teardown déjà vu, but still different

Fairphone has recently announced the 3+—as its name indicates, it’s not an entirely new model but rather an upgraded version of the Fairphone 3. This time it’s 40% recycled plastic and has better camera specs: a 48-megapixel main camera and a 16-megapixel selfie camera. Granted, the rear Quad Bayer-powered module doesn’t have mechanical OIS, it relies instead on electronic image stabilization.

That’s quite an upgrade from its predecessor, which featured 12- and 8-megapixel cameras, but don’t fret Fairphone 3 owners! Users of the prior model can nonetheless benefit from the 3+ camera upgrade by replacing the camera modules. That’s right! Fairphone is selling camera module upgrades—something not even Google got around to.

The Fairphone 3+ gets one other update, although not of the hardware kind. The 3+ ships with Android 10—a life-cycle-improving OS that the Fairphone 3 will also be able to take advantage of.

A phone is greater than the sum of its parts

Fairphone’s message is clear: if you feel the urge to upgrade, you shouldn’t have to upgrade your entire phone. Instead, upgrade only the parts that you want to renew—by picking up a screwdriver, and simply doing it yourself!

Modular smartphones existed before the Fairphone, but none of them followed this concept of modularity. Google’s Project Ara, the LG G5 and the Moto Z instead relied on huge modules that could be swapped without opening the phone—which made their designs bulkier and more compromised than they might have been otherwise.

Fairphone though, isn’t afraid to let their users whip out a screwdriver—which means fewer design compromises, and a modular design that not only awakens the DIY spirits of the phone owner, but also leads to a long-term and thus more sustainable usage of the phone. If you ask us, that’s the best possible win-win situation.

“We highly appreciate it when long-lasting product design—and a circular life cycle—are key determinants for a manufacturer like Fairphone”, says Matthias Mayer, Managing Director at iFixit Europe, “as they are key to the Right to Repair. To make those determinants an industry standard, entrepreneurs with shared values, politics and society need to work together.”

Our mutual appreciation for a circular device lifecycle is exactly why we continue to partner with Fairphone. In the past we’ve created Fairphone repair guides and supplied all kinds of replacement modules, and today is no different. We’ll be selling the new 3+ camera modules in our European store, too—and we’re joining Fairphone’s Modular Take-Back Program to make it easier for German customers to send old modules back.

There are plenty of examples of what not to do in the smartphone world, so it’s a breath of fresh air to be able to praise thoughtful design. Far from resting on their 10/10 laurels, we’re pleased to see Fairphone push for ever more repairability. Today camera upgrades, tomorrow, a greener world! 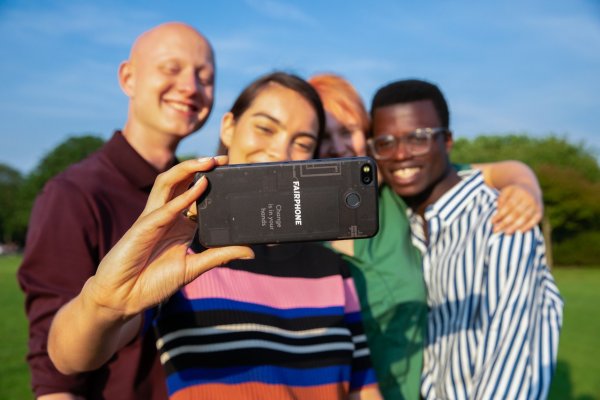 Fairphone 3 Is Reshaping Our Relationship With Mobile Electronics

Wow! This looks pretty fabulous. While it’s technically a “downgrade” from my current phone by hardware specs, it’ll be upgrade for me in terms of meeting my personal ethos. I have bought many phones, but it’s been decades since the last one I felt I owned. I had an OpenMoko Freerunner, which encouraged folks to pop it open and tinker and even published the hardware schematics as “open source”. If the Fairphone3 is as good as this review suggests, I look forward to once again having a phone which I truly own. (“If you can’t open it, you don’t own it!”)

Only one question: the review doesn’t mention anything about Free Software. While that’s not technically in iFixit’s remit, I bet I’m not the only one here who’d have appreciated a quick mention of whether the Fairphone3 requires proprietary software to work. Being able to open the hardware is only the first half to owning a device. If I cannot control the software, then I still don’t own it.

I believe it runs stock android (no bloatware)

Beyond open source, it needs to be free from lock-in to proprietary services. This one does, in fact, fit the bill. See the following: https://esolutions.shop/shop/e-os-fairph...

It is available installed with a “de-googled” Android - so it is better than stock, it is actually a version that removes Google’s hooks into their proprietary services that gather data on what you are doing.

Awesome news! I hadn’t come across Fairphone until seeing them on iFixit today but I’ll definitely be making that my next phone purchase when this one gives up the ghost (and hopefully my last for a while)… :)

But if you can upgrade the camera how is Company A going to sell you a new $1000 phone I mean come on people capitalism!!