This is a continuation of my series of posts about repair at Burning Man. I travelled to the heart of Nevada’s inhospitable Black Rock Desert to study the effects of accelerated entropy on technology.

Not everybody can fix a car. But if you drive yours out to the Black Rock Desert, odds are pretty good you’re going to need to find someone who can. The super-fine alkali dust is the perfect material to clog air filters, and the conductive dust has a nasty penchant for knocking out alternators. While I was there, I was blown away by the incredible variety of cars that people bring to Burning Man. I marveled at moving piles of junk that looked like something from Mad Max. Given the combination of old vehicles and hostile desert conditions, most people are unprepared for car problems. In fact, the DPW folks have coined the acronym ‘USV’ for a lot of the cars that show up: Unprepared Sh*tty Vehicle. In my last post, I talked to Wingman (the main auto mechanic on the playa) about the problems people run into on the playa, and some desert repair tips and tricks. He also gave me some tips for preparing your vehicle for the next time you head out on a major desert expedition.

First, make sure your car will make it *to* the desert. I talked to a number of people that had car problems on the way to Nevada! I totally understand how that can happen. Dealing with auto maintenance issues is always the last thing on my to-do list when I get ready to leave for a trip, but I’m starting to think I’m doing it wrong. While routine maintenance is easy to do at the last-minute, you’re in trouble if you find a major problem. It’s hard to obtain quality parts at the last-minute, and you end up paying the price, both in quality and in your pocketbook. Save yourself the trouble and do a pre-trip check a week or two ahead of time.

Now, if this is starting to sound like preaching, I totally sympathize. It’s easy to write repair tips and tell folks to come prepared. I got the ‘be prepared’ mantra pounded into my rather thick skull in the Scouts, and I’ve yet to fully absorb what it means. I thought I was prepared for Burning Man: I had enough food for ten people for a week and a well-endowed toolbox. I even had some emergency flares and a quart of oil: I thought I was set. But I missed a few things, and it bit me—hard—on the way home. Before I tell you how I screwed up, here’s what Jim recommends.

Six things your car needs you to bring to Burning Man

I’ll be the first to admit I only have a couple of these parts in my cars. That leads me to a a rather embarrassing story: driving back from Burning Man on I-5, a semi truck forced me off the road while dodging another fast-moving semi merging onto the freeway. The Law of the Freeway is simple: big things always win. Knowing all-too-well what my place in the food-chain was, I dodged out of my lane quickly. Sliding into the left shoulder, my rear tire collided with something that meant business at 70 MPH. I found out later that it sliced a nice 1/4″ circular hole in my tire. But no problem, right? I knew I had a spare. Pulling off to the side of the road, I was perversely excited to get some exercise after five hours of driving.

Of course, I had all of my camping gear jammed into the trunk blocking access to my spare. I was quite the image when a highway trooper pulled up: standing on the site of the freeway, covered in playa dust, removing camping stoves and boxes of food from my trunk as fast as I could. The officer told me that he normally asks people if they need any food or water, but joked that he clearly didn’t need to worry about me.

Imagine my chagrine he watched me finally get to the spare and realize that I had no jack! (I had the crank handle, but not the jack itself.) So I asked the cop to borrow his. And guess what I learned? the CHP has an unfortunate (if understandable in hindsight) policy against loaning out their eqipment. I felt pretty stupid having to call a tow truck just to jack up my car. In fact, once he arrived I pridefully refused to let the tow truck driver help. It was my tire and I fixed it my dang self.

Do yourself (and Wingman) a favor: be better prepared than I was. I’ve posted some more photos of Wingman’s Burning Man repair yard over on my flickr stream. 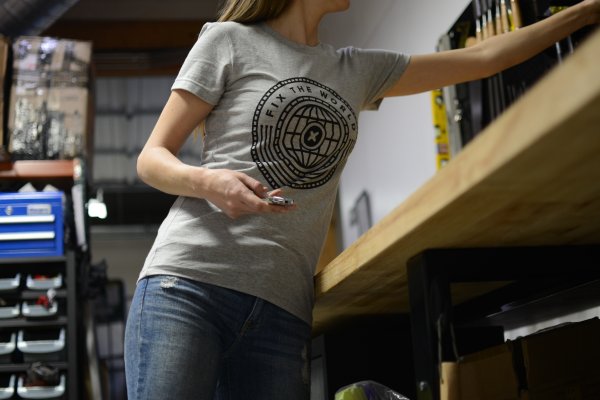