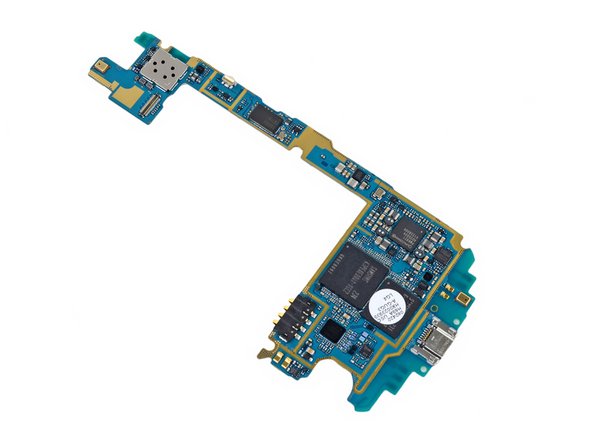 Between step 13 and 14, there should be a step to detach the cable to the camera lens and speaker assembly and the removal of the assembly.

The are usually $100 and Galaxy S III (Verizon) Motherboard

I have a motherboard of samsung galaxy s3 sgh-t999 t mobile pm me here's my email tan.jeffrey84@yahoo.com for more info

Cheapest place to buy them is ebay.

I need Mother board for S3. If anyone have then contact idris.dw@gmail.com

I have a samsung sgh-t999 board pm me if u want tan.jeffrey84@yahoo.com

Hey looks easy! but where do you get the motherboard from?

but where do you buy the motherboard?

I followed the instructions to a tee. Trying to save my old info/motherboard from my galaxy III that has a smashed screen, so I bought a used one and put my old motherboard in it. Everything went perfectly except the most essential thing - the on/off switch for the phone doesn't match up anymore. There's no way for me to turn on my phone on or off unless I go through steps 1-14 and proceed to use a needle to turn it on. I might as well use both phones as door stops now. If anyone wants a motherboard or 2 feel free to contact me before I chuck 'em over a cliff.

hey i am looking for a motherboard, pls drop a mail at mshah0510@yahoo.com

Do yo have a extra motherboard, mine will turn my phone on then instantly turn off but it will charger batteries, it will vibrate and light up all the time it has slight water damage too a spot I have taken it apart a dozen times. It's a galaxy s3 how much would you want for it.darrinpease@Gmail. Com

hello! we are missing a step between 13 and 14. the top portion of the cover which is the speaker assembly!

I samsung s3 having a problem, I need help fix it. thanks Ayub

i replaced my old galaxy s3 motherboard today ... but i had lots of pics in an galery lock application soo can anyone get those pics from a damaged motherboard ??

hi ... i replaced my old motherboard of galaxy s3 today ... but i want to ask tat is it posible tat some one can get pics from a galery lock aplication in my old and damaged motherboard ???

I have a i9305 with broken glass and a i9300 in perfect shape. is it possible just to replace the motherboard in the i9300 with the i9305 (to get more RAM and LTE support?) or should the antennas and more (?) also be replaced?

I want to do the same.

Have you tried it? Is it worked?

Or separate screen from frame

so are all s3 models have compatible motherboards ? I have I9300 and it has a broken LCD, can I buy sprint samsung s3 and replace only the motherboards ?

How can you tell which mother board you need there is like 5 different motherboards up there ?

How do I know what motherboard I need there is about 5 up there and I don't know which one it is ?

I need Mother board for S3 I9300. If anyone have them contact Shovokhan55@gmail.com

Need SGS3 T999 I747 phone to put my motherboard in. Any color. LCD and glass must be good.

I would like to add my experience with a motherboard replacement with Sprint. I bought a replacement SPH-L710 motherboard through iFixit.com's website. The motherboard was sealed in an electrostatic bag; however, upon opening the bag I noticed the SD card reader had signs of slight wear/scratches on the component. Other than that, product was fine. Replacement and install went off without a hitch. Booting up revealed a fully wiped, Knox enabled OS.

After calling Sprint to activate the phone, they informed me the IMEI/ESN number was not valid due to it being already activated through another carrier. They will flat out refuse to activate it. So, to sum up, be careful when replacing GS3 motherboards as the replacement may be on Sprint's internal blacklist even though sites like Swappa.com will tell you that the IMEI/ESN number is fine.

I was able to switch the motherboards of two phones following these steps. Thanks very much for providing these.

My Repair is for a tablet not a phone

The power switch broke and I had to replace it. It's half the size of a grain of rice and the smallest thing I ever tried to solder on. In the end I succeeded, but just out of luck and sheer stubbornness. Can't recommend that to sane (non-pro) people.

Hy I Need Galaxy s3 i9305 lte Motherboard My Email is rj.abid1@yahoo.com

screw size #0 in instructions but #00 screwdriver is needed.  Why?

Hey Jack, #0 might work, but the #00 should be the best fit. The guide has been updated to reflect this.

Hi, I need a working logic board for S3, AT&T. The charging connector on mine broke. The phone still works. Currently charging the phone with a wireless charging module adapter which doesnt make contact reliably and is inytermittent. was wondering changing the board would be a cheaper option. When you use a new Logic board i suppose the phone’s old IMEI is no longer good. Is that True.

Any one with a logic board please e-mail me at trcengineer@yahoo.com